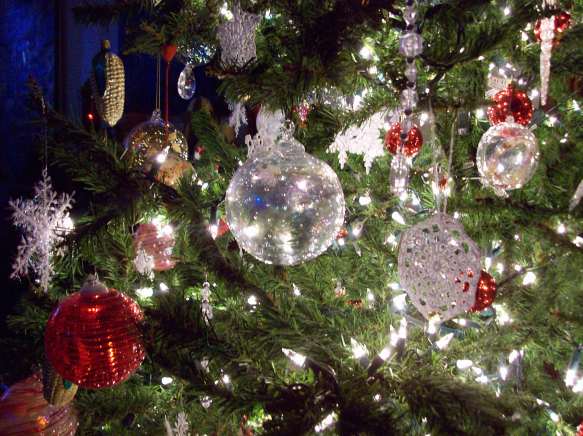 Andie and I  slept in, but rose early enough to do our pre-toast-time morning walk to the Methodist Church and back before the worshipers arrived and sang Hallelujah at the top of their lungs. Lately I have often thought that this little country church is most blessed; first, because its preacher is a particularly kind and lovely human being and secondly, despite nights that dip into the twenties or low thirties there blooms by the office outbuilding a tiny garden lined by large river stones  filled with clusters of Paper Whites, straw flowers and a few springs of lavender. Nearby the contemplative rose garden is blooming with pink and white roses. In the dead of winter!

The poor cousin across the street, the shabby Evangelical chapel, is not faring so well. The baby Jesus in the nativity creche disappeared:

“Joe, Joe! Come quickly! All I said was vote for Roy Moore and he disappeared!”

The village was seemingly deserted and so still. We witnessed another calamity. Apparently Santa died of a stroke and we found him drooped over the porch railing of a neighbor’s house with all his air discharged. So, Andie and I went into teleological denial and returned home commencing into the joys of a celebratory holiday toast-time. Being Christmas and all we elevated our usual toast-time butter and jam fest with a sticky-bun from the city bakery and settled into story time:

It was the night before Christmas and throughout the house Michael and Andie were stirring because of the mouse. Mr. Mouse explains many mysteries in the cottage. He has been in residence for many years and over the those years has grown from a sleek youngster that quickly vanished just out of sight at the corner of a quick eye glance. He has been very busy this holiday season fussing around that large bag of Andie dog food. He is slower these days and dare I say looks more like a hamster as he waddles back to his hidey-hole when the light is suddenly turned on. I don’t remember him being quite so bold in years past. Perhaps the kitchen was more busy and bright when Trace created wonders there, especially around the holidays. 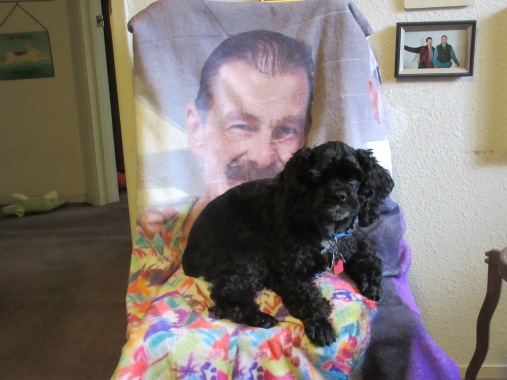 So, I spend many hours plugging holes and removing bags of grain or whatever Mr. Mouse has been plundering. I’m just grateful that he’s not the ghost that gets Andie up from a deep sleep to stand on the edge of the night bed and stare down the hall….at something.

Andie has no memories of a Vermont Christmas  like I do, nor understands my joyful melancholy in embracing those past visions and that includes Mr. Mouse, which as any Vermonter would agree considers humans invading their territory in ancient farmhouses as grounds for war. You get somewhat used to rodents in the country, especially when it’s 10 below and all Gaia’s creatures deserve sanctuary. I don’t know if that applies to gophers, for whom I have applied a fatwa and am considered a terrorist among their flora devouring legions. (Many of those stories are contained in the latest book ‘Pentimento’ by Michael Browne on line at Barns & Noble or Amazon.)

Andie and I have had a sweet, quiet and very cheerful holiday season filled with a peace, which mitigates the anxiety that profound changes in the national identity have engendered. Trump’s ruination of the old Republic and the Republican war on the poor, seniors, children, women, Vets and working class citizens have left us in fear. But, God knows, to maintain sanity we have to act with considerable will to withhold the deleterious  effects of rage and resistance, which harms the remaining security of our final years, not to mention the peace of mind that stabilizes an A-fib heart.

The year has been filled with suffering, death and calamity for many of us. A dear friend has declined in recent months and has left her hermit’s home to move down south and the care of her loving daughter. Fires have killed many in our area and thousands of homes and businesses burned to the ground. We are exhausted with politics tainted with collaborative treason and the dismantling of an old democracy which has withstood crises for over three centuries, but now seems so vulnerable to the plutocratic fantasies of weak Republican minds in thrall to a fraud like Ayn Rand.

These are frightening times, but for all that Andie and I choose to live in plausible deniability from day to day. I do of course, but Andie is unaware of the danger. The other day the landlord’s son came over to clean the gutters before an impending storm and implied to me that future plans included bulldozing the cottage and garden as well as the property next door to build a quadruplex now that post fire going rates for a one bedroom have stabilized at $3000.00 and up.

Yes, it’s frightening to feel so vulnerable, but the context of love is so vivid these days, the coalescing of community and the empathy of strangers in the context of everyday normal pursuits, like polite grocery shopping is quite noticeable and  uplifting in our immediate environment.

Packages filled with treats and cookies have anonymously appeared at the front door; one of which contained all my most favorite baked goods from the local village bakery. Andie received a gift box from her Fairy Dog Mother Sara, filled with a new pink-down walking coat, home baked treats, and toys, one of which, a little lamb, is her favorite and which she drops at my feet after toast time. Now that the book is finished I have more time to play with her. Friends and neighbors have stopped by to check on us and wish us well. 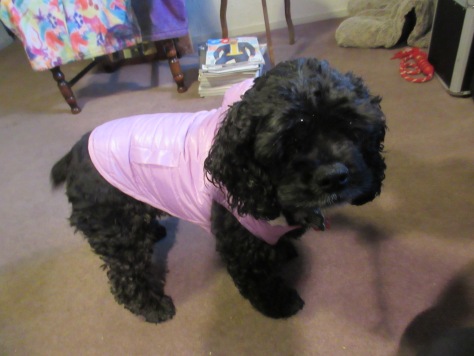 Generous gifts from friends guarantee that the Andie fund will buy her food, medicine and pay for Vet bills for the foreseeable future. Two old friends have come to lunch and we enjoyed wonderful conversations. I am becoming aware of the fact that after so many decades of care giving and a loving relationship ended with Trace’s death that I have an outside social life for the first time in decades and it is all so new. Andie and I experience the incredible grace of kindness that is our life now and we rejoice and are most blessed.

We wish for you a safe, healthy and secure New Year.

This entry was posted in Uncategorized. Bookmark the permalink.

This site uses Akismet to reduce spam. Learn how your comment data is processed.