Early, shortly after dawn, Andie stood on the corner of the bed and stared silently through the open door and down the hallway as if something was there. She did it again later in the night before curling up as close to my chest as she could.  The ghost was back. It is always somewhat eerie when she does that, for the very act of it quickens my heart and puts me on alert.  I long ago decided that it is/was a house mouse skittering across the kitchen floor to check out Andie’s dog bowl, which is always cleaned out, because Andie leaves nothing to chance. She is particularly serious and fastidious about food, and has stashes of fallen plums and path bark in her study bed just in case a famine should be visited on our very haute village.

In these uncertain and dire times I suspect, if Andie were thinking like a humanoid carbon unit,  she would have already made plans to escape under the barbed-wire border fence and find sanctuary, where unknown to her and vexing to me lives an estranged relative, who condemns my lifestyle as an offense to Gawd, lives in ex-pat splendor and considers exceptional privilege a natural and just reward for services rendered to capitalist aggression. I imagine that while I might be turned into the Gilead police, my dear Andie, would by sheer cuteness, be adopted into a perfect Libensborn new family and be born again.

I imagine That Andie has sewn little gold coins into the lining of her day rug, packed her savings of dog treats in a neat bundle for quick retreat and slipped her gems into the lining of her dog collar for a better future in a new and strange land. We have become strangers and exiles in our own land, or so it feels these days. We gather with our heart’s kind, share stories, play music, sing songs, read poetry, cook nourishing food, and in voices soft and loud resist the terrible changes that are transforming the reality of lives as we have always known them.  I think of my favorite exile prophet and his lament : ” By the Rivers of Babylon we sit down and there we sing when we remember Zion.”

Well, as you can quite clearly see from the above musing, I have been watching too many dystopian movies, the dregs of Law and Order, which haunts at least three channels simultaneously on these summer nights. Even PBS, which manages to throw a Nature or NOVA bone our way every now and then has packed Lawrence Welk back into his sepia, time capsule coffin for another fill-in run next year. In its place is a horror show of ancient Disco bands and elderly audiences of Saturday Night Fever spandex wonders with gold chains a bouncing, jumping out of their seats and reliving a four-line night of abandonment.

It really won’t do, to inflict too much dark peckishness on you dear reader, so, to wit, I retreat if only momentarily into that realm of denial with which TV gurus with names like Dr. Phil, Dr. Laura, Dr. OZ, Oprah and yes, even Judge Judy, preach a hearty by your bootstraps, judgemental white privilege vision of denial made successful. Yes, Oprah, that includes you and your $4000.00 handbags. Yes! Everybody gets a FREE gift bling package of carcinogenic makeup products and Ivanka silk scarves made by child slaves in Eritrea. Isn’t that fabulous! Shame on me. The snark has jumped the tracks. 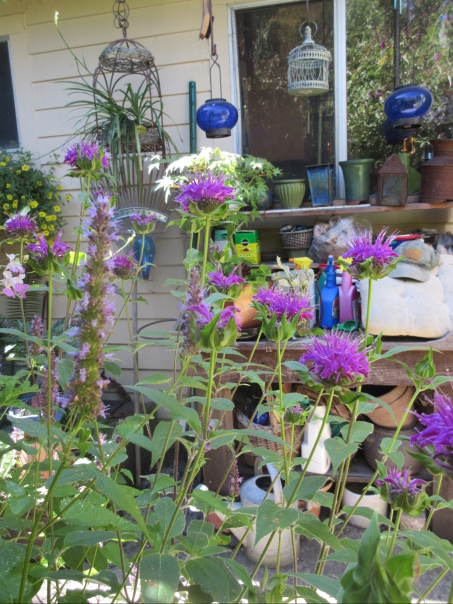 Thank Gaia for the garden, for when all the above nightmares, mind monsters and tsunami’s of American cultural garbage crowd our sanity, Andie and I retreat to the garden and there find peace, fun and yes, even a true happiness. There, change is part of the truth and it’s music is found in the seasons, inexorably and subtly changing in the passing moments like an exquisite and complex kaleidoscope.

The delicate breath of that ghost brushed my neck the other day, a hummingbird to some, to me a portent and message. It seemed attracted to the Hawaiian shirt I was wearing in lieu of the potent perfume of butterfly bush plumes now gone to seed.  Something in the human soul in complete harmony with the complexity of natural life senses the changes. I often attribute these non-cognitive understandings as infant memories….a language of sensations that distribute meaning before verbal language assigns definitions. It is a primal and wondrous way to experience the basics closer to truth than reality assigned to paradigm. It is still a searing white sun summer, hot enough to take the breath away and cold enough at night to warrant a blanket and the closing of open windows. It has begun.

Summer’s precocious splendor is exhausted already. Only a riotous color of zinnias, fading roses and white daisies  testify to endurance. Morning-glories climb in the shade as a final salute to the glorious beginnings of spring. Hardy four-o’clocks  release their perfumes  at dusk replacing the intoxicating fragrance of Honeysuckle now faded. The spring sun once flooding the bedroom in which Andie and I sleep and/or watch the Society of the Spectacle unfold on TV now appears in the study next door through its large windows, it’s summer arc changing in apogee and its light illuminating books, and loving photos like icons in a sanctuary.  In sympathetic energy the heliotroping California primroses on the side garden gyre to a different direction in dance.

At night, before the cooling fog rolls in from the ocean over the hills and settles in our green valley I look up and find the Big Dipper is rising and descending lower on the horizon and my joy at her dominating the night must accept the changeling seasons and their eternal stride obeying the laws of physics and transience.

Meanwhile, the practical matters of maintenance give grace to the old tool box, which manifests in fence ties, chicken-wire, tin-shears and pliers to repair a hole in the fence because Andie has discovered in her newly acquired tendencies, adventure and the manifest possibility of a border crossing in the back of her mind.

This entry was posted in Uncategorized. Bookmark the permalink.

This site uses Akismet to reduce spam. Learn how your comment data is processed.